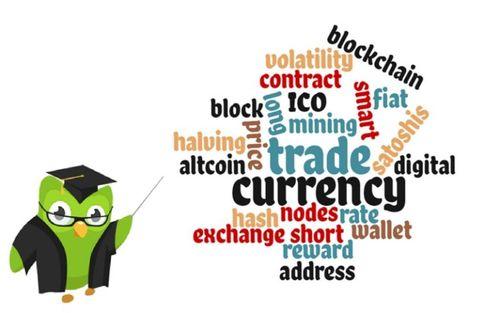 One of the reasons why some investors feel wary about cryptocurrency is because the terminology feels alien. A brand new concept that relies on a new form of tech (blockchain) and comes with its own set of terms can be a bit much to process all at once. As a result, people shy away from cryptocurrencies and place their faith in investment avenues that they do understand.

One of the ways to dispel this sense of confusion is to explain the popular cryptocurrency terms. This article covers the popular trading terms related to cryptocurrency.  Watch out for the next one too where we cover the generic terms!

A cryptocurrency exchange is a website where you can sell or buy different cryptocurrencies. CoinBase is an example of an exchange.

Fiat refers to the legal tender of a country. It is a government issued form of currency. An example of a fiat currency is the dollar.

A whale refers to someone who owns very large amounts of cryptocurrency. A few examples of people who are considered Bitcoin Whales are the Winklevoss Twins, Tim Draper, and Satoshi Nakamoto.

Think of these as ‘for sales’ signs that you may see outside a home or store. These refer to orders that are placed by different traders to sell or buy a cryptocurrency only when it reaches a specified amount. The orders are basically what are sold or bought against once the traders place market orders.

In order to buy or sell cryptocurrencies, traders must be able to see the limit buy and sell orders. These limits are represented in the form of graphs for traders to decide their next course of action.

Any coin apart from Bitcoin is considered an Altcoin. A few examples of Altcoins include Ethereum, Ripple, Monero, Dash, and so on.

When someone advertises another cryptocurrency, it is known as shilling. A great way to know if someone is shilling is if they make wild promises like how rich you are going to be.

FUD stands for Fear, Uncertainty, and Doubt. People who spread FUD are known as FUDSTERS. The people who do so generally want the price of a specific currency to drop, which is why they spread baseless negativity.

Market Cap refers to the total value of any cryptocurrency. The total supply of the currency multiplied by the price of one coin indicates the market cap.

Pump and Dump refers to a recurring cycle faced by AltCoins. In this, the popularity of an AltCoin increases suddenly, which then increases its price. This is then followed by a huge crash.

A bagholder refers to a person who is adamantly holding on to an AltCoin, after the Pump and Dump. They generally hold on to the coin hoping for a rise in prices in the future.

These are most of the popular trading terms associalted with cryptocurrency. The more familiar these terms feel to you, the sooner you will find cryptocurrency and trading less intimidating! Look forward to our next blog on generic cryptocurrency terminologies!

Blockchain Technology – Everything You Need To Know!

Rohit ChaddaBlockchain Technology, CryptocurrenciesNovember 10, 2018
Due to the sheer newness of Blockchain technology, it can often sound like a complicated concept that has nothing to …
END_OF_DOCUMENT_TOKEN_TO_BE_REPLACED

Rohit ChaddaBlockchain Technology, CryptocurrenciesJanuary 2, 2019
We’ve all heard of Bitcoin millionaires who became rich overnight after investing in cryptocurrencies. Even though the idea of any …
END_OF_DOCUMENT_TOKEN_TO_BE_REPLACED

Rohit ChaddaCryptocurrenciesDecember 9, 2018
In our previous blog, we went over the cryptocurrency terms related to trading. As a consumer, you may come across …
END_OF_DOCUMENT_TOKEN_TO_BE_REPLACED

Rohit ChaddaBlockchain Technology, CryptocurrenciesJanuary 12, 2019
Legality of cryptocurrency always seems to bring up lots of doubts. I figured its time we put put some of …
END_OF_DOCUMENT_TOKEN_TO_BE_REPLACED

Rohit Chadda is an investment banker turned digital business leader with two successful exits behind him. He is currently leading the digital business at Zee group (Zee Entertainment, Zee Media and DNA) – the largest media conglomerate in India with a portfolio of 19 brands across 9 language. Read more...